A cell phone with a stripped screw is not fun to deal with. No matter how careful you are there is always a chance that you will encounter this situation. Now if you were working on something bigger like say a car you would have a few more options available for dealing with this problem. Easy out screw extractors are one of the solutions that a mechanic might use in order to remove a screw that has become stripped. We’ve also heard of using Krazy glue to bond a broken bolt long enough to loosen it after the head was broken off. Unfortunately these methods don’t really work on something as small as a screw designed for phones.

Why do phone screws get stripped in the first place? 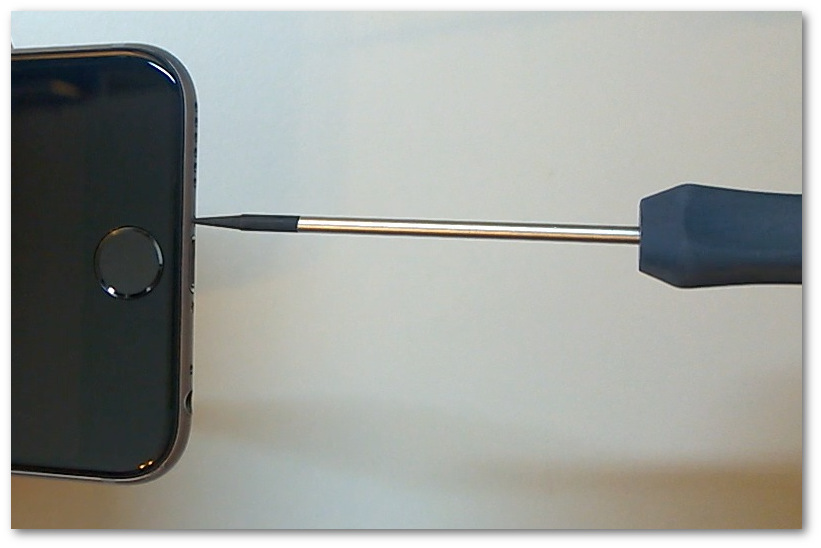 There are two common reasons that you end up with a screw that can’t be turned with your driver. The first is over tightening. Whether this happened at the factory, during a previous repair, or because you started out turning the driver in the wrong direction this is a very bad problem. These small screws do not require much torque and using just a little too much not only weakens them but increases the odds that your driver will slip when you try to remove the screw.

The second common reason that a screw ends up stripped is because someone attempted to use the wrong bit. We’ve seen this many times. One of the most popular phones for this mismatch was the iPhone 4. Since the early models used a small Phillips bit a lot of people got into the habit of picking up their driver and twisting without looking at the screw very closely. Once Apple decided to switch over to the Pentalobe access screws this made things more complicated. Some thought that they were dealing with a Torx head and tried using that driver. Obviously neither the Phillips nor the Torx fit properly so a lot of Pentalobe screws were damaged making future repairs difficult.

Even when you know which type of driver to use there can still be a problem. Selecting the right sized driver is important too. Using a PH000 when you need a PH00 can allow just enough room for your driver to slip. As the inner part of the head wears away it becomes increasingly difficult to grab. NEVER REUSE A DAMAGED SCREW! This should be a no-brainer but some techs do this and it is a very bad idea. Think about how much worse it will get since the driver already doesn’t fit properly.

One more problem to throw into the mix here is the JIS or “Japanese Industrial Standard” for cross hair bits. They are similar to Phillips drivers but the point at the end of the blade is not the same height. Mixing up drivers that seem the same but aren’t is a perfect way to strip away the screws head.

So what can you do? Well there are a few tricks of the trade that we want to share with you that might help. Unfortunately there’s no way to guarantee that you will be successful but at least you can try these tips before you get really frustrated and break something else.

We recommend trying the following.

Use a precision screw extractor. This is the one tool that is designed specifically for those of us who work on cell phones and other small electronics. They don’t always work and chances are the average do-it-yourself-er won’t have one on hand but if you do, try this first.

Cover the end of the driver with duct tape. If you still have most of the screws head in tact this should fill in the gap just enough to grip one last time.

Put a very small amount of Krazy Glue on the end of your driver. This works well in the case of stuck Pentalobe screws on the iPhone 5C. You’ll have to hold your driver very steady while the glue bonds and also make sure that you put slight pressure on the bottom end of the glass screen. This will usually prevent it from locking the screw in place. You might not even have to twist but instead slowly pull the screw out.

Use a slightly larger bit. Sometimes you might have worn away the T-5 Torx head but a T-6 might actually fit. Although it won’t be a snug fit it could be close enough to grab. A slight downward pressure may also help it stay in place long enough for a turn past the point where the screw is frozen. Torx bits sometimes work when you have completely worn away a cross hair head.

Dremel a slot. We don’t love this option but we are getting desperate at this point. If the screw is in really bad shape and you have a steady hand there might be a way to cut a straight slot into the head. From there your slotted driver will be able to turn the screw. Just make sure that you won’t be cutting into anything else. If that doesn’t work or destroys the screw completely prepare for the last resort…

Drill it out. We hate this option even more than the last one but if all else fails you just might have to use a small drill bit and carefully drive into the screw until the head falls off. At this point it should release whatever it holds in place and after removing said component you should be able to grab whats left of the screw with a small needle nose pliers and twist it out of the housing.